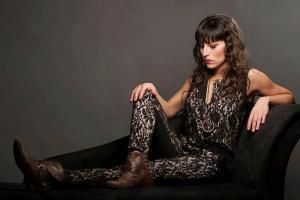 Boston’s “Sundress Rocker,” Sarah Blacker’s music will make you feel it all, In Waves.” Taken from the title track of her latest release, this lyric immediately informs the listener as to the emotional content of her songs. The record is filled with skillful rhythm guitar, piano and ukulele, and sung with a uniquely soulful voice which is much bigger than the size of the artist it comes from.

Blacker grew up listening to her parents' record collection which now sits stacked lovingly in her apartment. Paul Simon, The Beatles, America, and CSNY all formed the foundation of her musical consciousness. Teenage rebellion and discovery led to her love of alternative rock and the prominent and powerful singer/songwriters of the the nineties. Seeking to expand her abilities as a performer and songwriter, Sarah attended Boston’s acclaimed Berklee College of Music. She graduated as a Board-Certified as Music Therapist with a vision to save the world one song at a time.

Blacker’s catch-phrase, “songs save lives,” speaks to their role in her own life. She is grateful that her wayward journey through life has led up to making her edgiest record to date. Fueled by the desire to evolve, grow, and that anything is possible, Sarah Blacker has pushed and challenged herself to bring In Waves to the world.

The vision and spirit of the album is uninhibited authenticity, honesty and fearlessness. So with her daring new release, In Waves, and electric guitar in hand, Blacker is has just returned from her first national tour this spring,and is currently touring New England and the Midwest this summer and fall.