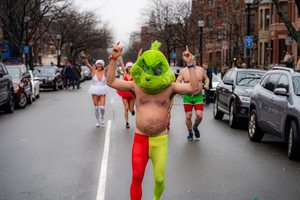 The Santa Speedo Run is BACK!

It began 21 years ago with people young and old braving the cold, snowy winter elements to run an arduous course through Boston's Back Bay, down Boylston and Newbury Streets.

One mile. Yes, you read that right....one mile.

Some ran fast, some ran slow. Everyone had fun. All in support of various Massachusetts charities. Over the years, things have changed. The run transitioned from supporting dozens of local charities to just one: The Play Ball Foundation.

Some runners have traded in their speedos for wacky holiday themed costumes, or matching t-shirts and track suits for their team, while others have continued to don the tiny red swim attire.

What has not changed is the spirit and passion for supporting those in need.

Where:
All over the place! Run locations can take place anywhere, and we anticipate runs taking place all over the Boston area and beyond

Each Organizer will map out their own route of “slightly less than a mile” distance (so training should begin immediately!)

How will it work?
There are three ways to participate in the Santa Speedo Run in 2021:

*If you are an Organizer, Fundraiser or Runner, you MUST fill out the waiver*

Organizers will plan out their runs and ask their network to support this feat of speed and endurance, all for the Play Ball Foundation.

Runners are suggested to donate to their Organizer's fundraising page and must fill out the waiver.

Supporters will show their support by making donations to the Organizers and Fundraisers giving pages.

Spread the cheer - we encourage you to use social media and tag us @ssrunboston and @playballma to spread the word about your “training and preparation”, “run warmup” and “run” (a term we use loosely). Use the hashtag #SantaRun2021

How will the fundraising work?
As has been the case for many years, Santa Speedo Run directly supports the Play Ball Foundation, which provides school-based sports leagues for middle school students in under-resourced communities (Boston, Holyoke, Lawrence).

Next Steps for Organizers and Fundraisers:
– Sign up & create your peer to peer fundraising page
– Fill out the waiver HERE
– Set your fundraising goal
– Email your network of support to donate to your run
– Fire up the Social Media #SantaRun2021
– Train (kidding!)
– Run! (alternately, shamble, shuffle, moon-walk)