Samuel Adams Pink Boots Release: When There Are Nine 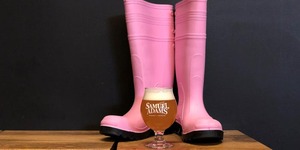 Each year, the Pink Boots Society teams up with hop purveyor Yakima Chief to create a special blend of hops for use in brews nationwide to celebrate International Women’s Day. Women at craft breweries from coast to coast team up to brew a special beer using these hops. At Samuel Adams, we brewed a Belgian Bruit IPA on International Women’s Day and will release it in our Tap Room on March 29. We are dedicating this brew to feminist icon Supreme Court Justice Ruth Bader Ginsburg and naming it When There Are Nine, inspired by her famous response to the question “When will there be enough women on the Supreme Court?”. (We wanted to name it Brut Bader Ginsburg but our legal team, uh, dissented.)

When There Are Nine will hit our Tap Room on Friday, March 29 for a special celebration from 5-8 p.m. Your $20 ticket includes:
-Your first pint of When There Are Nine
-A serving of four dumplings from Mei Mei
-Donation to the Pink Boots Society

We’ll be donating $5 from every ticket and $1 from every When There Are Nine sold to the Pink Boots Society, which fosters advancement and education for women in the beer industry. In honor of RBG and her infamous workout routine, we’ll have a plank contest to benefit the ACLU’s Women’s Right Project, which Justice Ginsburg founded earlier in her career. See you there!