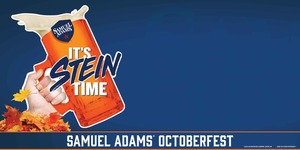 Test your mettle on October 18th as you try to claim the crown of 2018 Boston Brewery Stein Hoisting Champion. This month’s Brewery After Hours will make you want to shout PROST!

Stein hoisting is a beer-centric feat of strength in which competitors hold a full liter stein of OctoberFest out straight for as long as their arms or their willpower allow. It harkens to the fun and contests of Munich’s famed Oktoberfest, which - believe it or not – is technically one of the world’s longest and beer-iest wedding anniversary parties. The first Oktoberfest in 1810 was the marriage celebration of Prince Ludwig and Princess Therese and the people of Munich had so much fun, they wanted to keep the party going every year. We’re keeping the spirit alive in Boston with our October After Hours with German-inspired beers and some friendly competition.

While you wait for your turn to hoist, enjoy a pint or two of Sam Adams’ legendary brews in our beer garden and nibble on food offerings provided by local vendors. October’s specialty bottle release is Honey Porter, a beloved brew from the vault. It’s smooth, dark and roasty with a decadent touch of honey and will surely keep you warm this fall. Bottles will be on sale in The Shop for $16.99.

Your $10 ticket includes:
-Two pints of Sam classics like OctoberFest and Honey Porter and NEW Boston Brewery exclusives like Barrel Aged Marzen and Festbier
-Access to the stein hoisting competition (if you're brave enough)

Celebrate the marriage of Crown Prince Ludwig with us in style. Hoist your stein high and who knows what you might win?