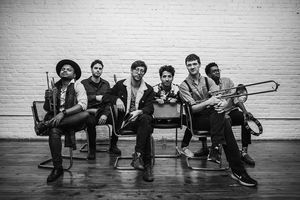 Sammy Miller and The Congregation are on a mission, crisscrossing the country like a vaudevillian revival show with evangelic fervor for music. The seven-piece band is pulling people out of their solitary lives and putting them in the moment with a bracing dose of joyful jazz performed with infectious theatricality. The New York City-based, familial collective has captured its frenetic energy and unflinchingly optimistic songwriting on its debut album, Leaving Egypt.

Sammy Miller and The Congregation has been described as a mashup of the sensibilities of Ben Folds and the Preservation Hall Jazz Band. The band freely mixes vocal and instrumental tracks live and on record, asking the audience to go along for the ride with the lead melody being carried by vocalists half the time, and instruments the other half.

The seven-piece group is a community of adventurous and charismatic superstar musicians who are conservatory-trained but who have not lost their childlike wonder and awe for playing music. The band lineup is Sammy Miller, drums and vocals; Sam Crittenden, trombone; Ben Flocks, tenor sax; Sammy's sister Molly Miller on guitar; Alphonso Horne, trumpet; Corbin Jones, bass and tuba; and David Linard, piano. Independently, the band members have performed and recorded with notable artists including Wynton Marsalis, Lady Gaga, Jason Mraz, and Beyonce.