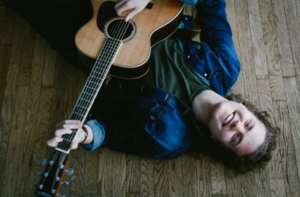 A multi-instrumentalist from a young age, Sam began learning drums and piano, falling in love with guitar at age 13. He then started writing original music, recording his first EP during his sophomore year of high school, while playing open mics in his hometown of Portsmouth, NH.

Over the past 4 years, Sam has performed over 700 shows across New England. These have included dive bars, biker bars, weddings, proposals, frat parties, house concerts, and everything in between. Since these humble beginnings, Sam has risen in the New England scene to play large rooms such as the Music Hall in Portsmouth, NH, Boston City Winery, Blue Ocean Music Hall, The Red Room, Tupelo Music Hall, One Longfellow Square and many other large venues as part of benefit shows and opening for national acts. Following the release of his single “Addicted” in early January, Sam headlined a sold out show at the 200 seat 3S Artspace in Portsmouth, NH.

In 2018, Sam was able to audition on NBC’s The Voice for Adam Levine, Kelly Clarkson, Blake Shelton and Jennifer Hudson. He was the season’s “Young James Taylor” and he was the first artist to ever perform a Jim Croce song on the show. Sam was selected by Kelsea Ballerini to be one of six artists in The Voice’s first ever “Comeback Stage”. He was able to work with and be coached by Ballerini, who called his performance “perfect”.

Hannah Siglin is a singer, songwriter, and guitarist from the Inland Northwest. Raised on folk music and studied in classical training, she writes in a variety of styles, specializing as a top-line writer and the front woman of her four-piece roots band. Since moving to Boston to study songwriting at Berklee College of Music in 2015, Hannah has been honored with the Pat Pattison Scholarship and debuted her band at Grey Fox Bluegrass Festival in 2017. She can regularly be found on Club Passim’s schedule, and continues to develop her artistry from a deep love of the American west.