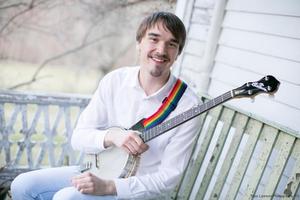 Born and raised in Wythe County in southwest Virginia, Sam Gleaves performs innovative mountain music with a sense of history. Under the direction of local teacher and barber Jim Lloyd, Sam took up string band instruments as a teenager, including the banjo, guitar, fiddle, autoharp and dulcimer. With his mentor ballad singer Sheila Kay Adams, Sam found his voice and fell in love with the mountain love songs, which he carries into his generation with pride. Sam’s performances combine traditional Appalachian ballads, dance tunes, original songs and the stories that surround the music.

Sam earned a degree in Folklore from Berea College and performed for four years with the Berea College Bluegrass Ensemble, directed by Al White. With that band and as a solo artist, Sam has toured extensively, performing at U.S. venues such as Mountain Stage and the Woodsongs Old Time Radio Hour, and abroad in Ireland, England, Italy, Canada and Japan. Sam has performed with legendary artists in the folk realm, including John McCutcheon, Peggy Seeger, Mary McPartlan, Cathy Fink and Marcy Marxer and Sheila Kay Adams. 

Sam writes new songs in the Appalachian tradition, telling stories about love, the home place, working people and present social issues in the mountains. Appalachian author Lee Smith has deemed Sam as “courageous as hell and country to the bone . . . the best young songwriter around.” Sam’s music has been featured by National Public Radio, Kentucky Educational Television, West Virginia Public Radio, Appalshop’s WMMT FM, KEXP, Exclaim!, The Windy City Times, Sing Out!, The Bitter Southerner, and Still Journal. Ain’t We Brothers, Sam’s debut record of original songs, is produced by Cathy Fink and was released November, 2015. Ain’t We Brothers has been reviewed by National Public Radio, No Depression and The Bluegrass Situation. Peggy Seeger called Ain’t We Brothers, “A stunning first album,” saying, “I keep very few albums that I am given. This one’s a keeper.”
Tyler Hughes hails from Big Stone Gap, Virginia, where he began learning the traditions of mountain music and dance at age 12. He performs regularly, but also dedicates time to teaching through private lessons, camps, and a variety of music classes as an adjunct professor at the Mountain Empire Community College in Big Stone Gap. Tyler is an accomplished square dance caller and also took the 3rd place ribbon in clogging/flatfooting at the Morehead Old-Time Festival in 2015. As a vocalist and multi-instrumentalist, he has performed all across the southeast of the United States both as a soloist and with several bands including the East Tennessee State University Old Time Pride Band, Fifthstring, and the Empty Bottle String Band. He graduated from East Tennessee State University with a Bachelor of Arts in Bluegrass, Old Time and Country Music Studies in 2015. He has studied traditional music at home in the Appalachians and across the Atlantic in Ireland and Scotland.

Today, Tyler performs a mix of Old Time, Country and Western music reminiscent of the first half of the twentieth century. His country music variety show is sure to include influences from his native Wise County, Grand Ole Opry stars like Little Jimmy Dickens and Hollywood cowboys such as Roy Rogers. Along with solo performances, Tyler appears with the Empty Bottle String Band and as a duo with Sam Gleaves. He is available for teaching private lessons, workshops and camps.