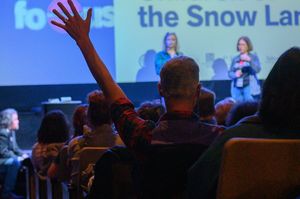 Salem Film Fest (SFF), one of New England’s largest all-documentary film festivals, will celebrate its 13th year by presenting more than 80 features and short films online in a virtual film festival - Friday, July 10 - Thursday, July 30. The festival was postponed due to COVID-19 just days before launching this past March.

"It was a real body blow when we had to postpone the fest in March. We took the time to evaluate the situation before deciding a virtual fest really was the best way forward.” said Joe Cultrera, Salem Film Fest Co-founder and Festival Director. “We can now offer most of the lineup we had already assembled to our audience in a safe manner. We’re also going to split rental profits with our filmmakers. So everybody will benefit from the event.”

Salem Film Fest will be partnering with eventive, a leading virtual festival platform for online viewing and video-on-demand and live streaming, as well as content delivery via streaming TV apps. Viewers may access films via Salemfilmfest.com or directly through the eventive platform https://salemfilmfest2020.eventive.org.

This year’s festival lineup includes more than 30 documentary features, including the World Premiere of SOMEWHERE WITH NO BRIDGES, by Charles Frank, a meditation on loss after a fisherman goes missing in Martha’s Vineyard, and the North American premiere of THE GOOD DAUGHTER, which examines arranged marriage in Taiwan by Needham based filmmaker Sally Wu, who won SFF’s Doc-a-chusetts Pitch competition in 2016.

Other films premiering include NARROWSBURG by Martha Shane, which chronicles a con man’s attempts to create the “Sundance of the East” in a sleepy New York town, AMERICAVILLE by Adam James Smith, which explores the pursuit of the “American Dream” by residents living in a replica community of Jackson Hole, Wyoming outside of Beijing, China, and THE WIND. A DOCUMENTARY THRILLER by Michal Bielawski, which tracks a destructive wind that arrives each year to terrorize a small town in Poland.

Also included in this year’s festival is RETROSPECTIVE: BLACK IN AMERICA, a selection of films that have screened at past editions of Salem Film Fest and have shed a light on the African-American struggle in the United States, including SFF 2012 Audience Award winner ALL ME: THE LIFE AND TIMES OF WINFRED REMBERT by Vivian Ducat and THE BLOOD IS AT THE DOORSTEP by Erik Ljung, which won the Michael Sullivan FRONTLINE Award for Documentary Journalism at SFF 2018. All festival profits from ticket sales for films included in the retrospective will be donated to organizations and individuals dedicated to combating racism and creating opportunities for African-Americans in the arts.

"COVID-19 has been a disruptive force to this year’s Salem Film Fest, but it has also offered an opportunity for introspection and reflection. In these challenging times, we are proud to offer a diverse slate of programming that both celebrates and challenges our notion of the world around us.” said Jeff Schmidt, Salem Film Fest Program Director.

A complete line up of films to be shown this year, accompanied by summaries is posted at www.salemfilmfest.com.