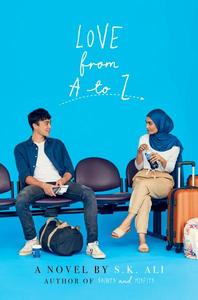 See S. K. Ali in conversation with Karen McManus and Sara Alfageeh, as they discuss Ali's Love from A to Z, a YA novel about finding love during the time of Islamophobia. Discussion, followed by author signings.

From William C. Morris Award Finalist S.K. Ali comes an unforgettable romance that is part The Sun is Also a Star mixed with Anna and the French Kiss, following two Muslim teens who meet during a spring break trip.

S.K. Ali is a teacher based in Toronto whose writing on Muslim culture and life has appeared in the Toronto Star. Her family of Muslim scholars is consistently listen in The 500 Most Influential Muslims in the World, and her insight into Muslim culture is both personal and far-reaching. A mother of a teenage daughter herself, S.K. Ali's debut YA novel is a beautiful and nuanced story about a young woman exploring her identity through friendship, family, and faith.

Karen M. McManus is the author of the New York Times and international bestselling young adult novels, One of Us is Lying and Two Can Keep a Secret. Her work has been translated into 40 languages worldwide. Karen lives in Massachusetts and holds a master's degree in Journalism from Northeastern University, which she mostly uses to draft fake news stories for her novels.

Sara Alfageeh is a Jordanian-American illustrator and creative director in Boston. She is passionate about history, teaching, girls with swords, and the spaces where art and identity intersect. Her clients sprawl from comic designs to film, including credits with the BBC, Harvard, Star Wars, NYU Game Center, among others. Her middle grade graphic novel, SQUIRE, co-authored with Nadia Shammas, is to be published fall 2021 by Harper Collins.