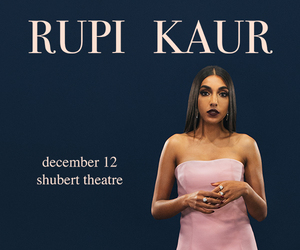 Rupi Kaur is a poet, artist, and performer. At the age of five, her mother handed her a paintbrush and said, “draw your heart out.” At seventeen, she happened upon a local open mic night where she performed her first spoken word poem. While studying at the University of Waterloo, Rupi wrote, illustrated, and self-published her first collection, milk and honey. In the years since, milk and honey has become an international phenomenon. It’s sold over 3 million copies, been translated into more than 35 languages, and landed as a #1 New York Times bestseller—where it has spent more than 100 consecutive weeks.

Rupi's long-awaited second collection, the sun and her flowers, was published in 2017 and debuted as a #1 global bestseller. Within the first three months it sold a million copies and was embraced by readers worldwide. She’s a Forbes 30 under 30, an editor of the 2016 Mays Literary Anthology of New Writing from the Universities of Oxford and Cambridge, and one of BBC’s 100 women of 2017.