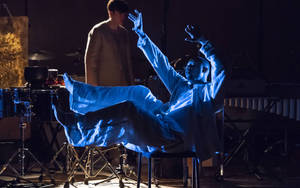 American Modern Opera Company (AMOC), the “hot-bed of boundary-pushing, inventive, chance-taking artists” (ZEALnyc) will present three pieces featuring company members at venues around Harvard Square in Cambridge. Led by Artistic Directors Matthew Aucoin (Crossing at the A.R.T. and BAM, Harvard ’12) and Zack Winokur (The Black Clown at the A.R.T. and Lincoln Center’s Mostly Mozart Festival), AMOC serves as the artistic home for seventeen of the most exciting singers, dancers, and instrumentalists of the rising generation. AMOC’s artists are committed to reimagining what it means to make opera in the twenty-first century: unlike a typical opera company, which features a constantly-changing roster of artists in one particular theater, AMOC focuses on deep, long-term artistic relationships among its core members. The company’s goal is to create a body of new, discipline-colliding music- and dance-theater works, conceived, developed, and performed by our artists.

Lauded after its 2018 Run AMOC! Festival premiere as “the best instrumental concert I have seen all year” by David Allen of The New York Times, Conor Hanick (“brilliant…effortlessly elegant,” – The New Yorker; “defies human description,” – Concerto Net) returns to the Loeb Drama Center Ex to perform the entirety of John Cage’s epochal Sonatas and Interludes, a hugely influential set of pieces inspired by Indian philosophy and written for prepared piano. Directed by Zack Winokur, this radically intimate experience is a Cageian collaboration between outer-worldly pianistic expression, light, and dance.

Hans Werner Henze’s chamber opera El Cimarrón (The Runaway Slave) is a tour-de-force sonic onslaught based on the oral autobiography of Esteban Montejo, an Afro-Cuban slave who escaped bondage on a sugar plantation, survived in the jungle, fought for Cuban independence from Spain, and lived to tell about it all before dying at the age of 113. Henze’s visceral score is a cry for freedom that transcends time and place. From the creative team behind A.R.T.’s acclaimed The Black Clown, El Cimarrón premiered in May 2019 at the Metropolitan Museum of Art as part of AMOC soprano Julia Bullock’s season as Artist-in-Residence at the museum.

With Care, a visceral, moving work for two dancers (Bobbi Jene Smith, former star of the Batsheva Dance Company, and Yiannis Logothetis) and two violinists (Keir GoGwilt and Miranda Cuckson), returns to Cambridge after its 2018 sold-out run at Run AMOC! Festival. Building on the cross-disciplinary work of A Study on Effort (“chilling, thrilling rawness” – The New York Times), With Care investigates the dynamics of caregiving, carelessness, and loss through a theatrical fusion of dance, music, and spoken word. With Care is a co-commission of ODC Theater, San Francisco and AMOC.