RRANG: Colors of an Untold Story 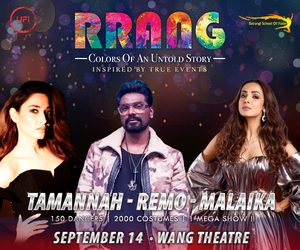 A spectacular production that brings to life the grandeur and extravagance of Bollywood dance and music, Rrang was brought to inception by the visionary mind of Rohit Baxi, the trailblazing director and choreographer.

Bollywood A-listers such as Malaika Arora, Tamannaah Bhatia, and dancer, choreographer, actor, and film director Remo D’Souza will be performing along with show’s dancers. Rrang is a one of a kind show that brings mysticism, vibrancy, and magic of old and new India to the big stage on a mass scale production. This remarkable production has over 150 dancers, 4,000 costumes, and special lighting effects that brings the magic of Bollywood in a live performance. Showcased on some of the most prestigious stages in North America, the theater production features original choreography alongside some of the most popular dance numbers.

Rrang: The Colors of an Untold Story is a tribute to the Indian film industry via a unique story that combines dance, theatre, and music. It weaves tradition with modernity, light with dark, and ancient India with modern India. Colorful costumes and elaborate sets create an unforgettable night of explosion and energy.