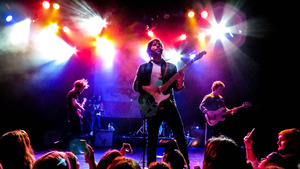 More info and tickets at http://www.ticketmaster.com/rooney-brighton-music-hall-boston-ma/venueartist/9089/838438

Our five piece rock band formed in Los Angeles in 1999 and after playing the Sunset Strip clubs and self producing EPs for a couple of years, we made our self titled major label debut and hit the road. We travelled all over the U.S., the U.K. and even made it as far as Japan. We toured with Weezer, The Strokes, Sloan, The Sounds, The Donnas, Travis, Keane and many others.

After our first record reached nearly gold status and yielded two successful singles, we retreated to L.A. where, after many hold ups, we recorded "Calling the World" over three weeks time. We then toured the world for another year and half with an eclectic bunch of artists including Ben Lee and The Polyphonic Spree. Our first single off the record climbed to number 1 in Germany and subsequently took us all over Europe multiple times.

2009 found us back in L.A. recording and experimenting in our new home studios while transitioning into a new label situation. We formed our own record label "California Dreamin'" and released our "Wild One" e.p. at the end of 2009 and our 3rd full length release "Eureka!" in June of 2010. Since then, we've enjoyed touring with The Crash Kings, The Young Veins, Black Gold, Hanson, and Eisley. We are currently enjoying our return to the independent spirit upon which we were founded and are looking back at a career which now spans over a decade. Thank you to all of our friends and fans who have taken the trip with us...we play for you.