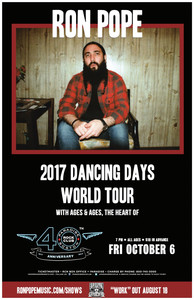 Fifteen years and seven studio albums into a career hovering at the edges of the music business, fighting for a seat at the table, Ron Pope is now in the midst of flipping that table over. It took a decade to become an overnight success. Hundreds of millions of streams, millions of singles sold, concerts packed out into the street all over the world; all of a sudden Ron Pope is part of the discussion. “At the very least, now I don’t really have to give a shit what anyone in the business expects from me. That’s pretty liberating. It’s like ‘Everyone’s making music that sounds like such and such this year’ and I can say ‘Cool. I don’t give a fuck; my fans just want me to do something good and they’ll stick with me as long as what I record is real and honest and full of songs that are worth listening to. So I’m just gonna keep doing what I do.’ That’s the freedom that holding onto my independence for so long and finding real success has bought me” Pope says from the East Nashville office of Brooklyn Basement Records, the label he runs alongside his wife and manager, Blair Clark.