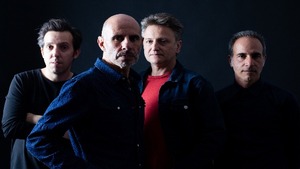 Formed in Holon in 1988, Rockfour broke the mold for Israeli rock bands. After achieving local success with their hit song “The Man Who Saw It All,” they were on the road to world success with a four-year tour throughout the USA. But mid-tour, lead singer Eli Lulai suddenly quit the band, immediately flying back to Israel and leaving his bandmates to complete the tour as a trio. Decades later, Lulai returns to Rockfour and while fans are thrilled about this reunion, the band is less certain.