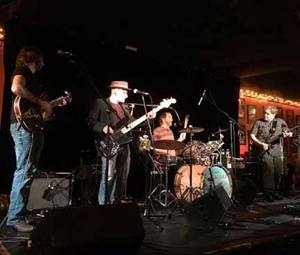 Alan Goodrich is also known for being the lead singer and drummer for “Alan and The Alligators” band, as well as drumming, singing lead vocals and playing acoustic guitar in the “Acoustic Alligators” (the acoustic duo presentation of the band). The Alligators critically-acclaimed debut CD “Reptile Rock” (released in 2000 on I.E.M. Records) has thus far been added at over 75 radio stations across the US and Canada, and charted twice in the Top 10 in college radio as reported by CMJ. Alan also plays in the acoustic duo “Alan Goodrich & Bruce Marshall” with fellow Concord, MA, resident Bruce Marshall, who states: “Trained by jazz great Alan Dawson, Alan Goodrich is a rarity these days: A rock solid percussionist who happens to be a singer, songwriter and guitarist of the first order.”

Alan and The Alligators is a three-piece Boston area band providing live entertainment since 1989 and is one of New England’s best bands for any event. Audiences appreciate our versatility, full sound, and talent for playing popular cover songs and catchy, danceable original songs. Our exciting performance style and expert musicianship has made us a popular live act. We love to play!