Rock Bound: Painting the American Scene on Cape Ann and Along the Shore 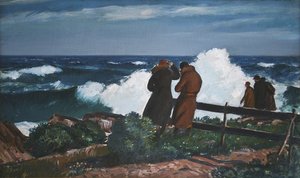 In the years immediately following the Civil War, Cape Ann set out on a path that would make it one of New England’s most vibrant and influential art colonies of the early 20th century. As the foundation on which this growth took place was broad, with countless artists working in a myriad of media, no one trend or style would come to dominate the emerging colony. There did arise, however, a fascination with capturing the "American Scene" as embodied on Cape Ann and in the surrounding areas.

With paintings drawn from private collections and the Museum’s own holdings, Rock Bound will explore the ways in which an array of artists sought to capture the natural beauty of the area, the power of the ocean and the hardscrabble way of life that was quickly disappearing in other areas. The exhibit will also explore how artists placed local populations and traditions in their context, whether it was carpenters working in the shipyards of Essex, women and children relaxing on wide sandy beaches, or fishermen and quarrymen pursuing their timeless and dangerous ways of life. Artists featured in Rock Bound will include Jane Peterson, Martha Walter, Gifford Beal, Leon Kroll, Marsden Hartley and Stuart Davis among others.