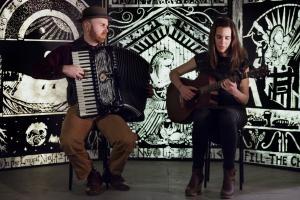 Robinson & Rohe are playing Club Passim in Cambridge, MA on Wednesday, December 13th at 8 PM. Liam Robinson honed his wide-ranging skills as an original cast member of the Tony Award winning play “Warhorse,” as musical director of Anaïs Mitchell’s Off-Broadway folk opera “Hadestown,” as a composer in the Red Light New Music collective, and as a member of the Becca Stevens Band. Meanwhile, Jean Rohe began touring and recording with her band, Jean Rohe & the End of the World Show, honing a honeyed, far-ranging voice and collecting accolades along the way. For the past ten years, Robinson & Rohe have been performing "The Longest Winter: A Christmas Concert and Singalong". Annually hosted in venues and house concerts throughout the Northeast, this event has become an audience favorite, a staple of the season. This year, they bring their midwinter music to Club Passim. Robinson & Rohe go deep into the Christmas repertoire: the mystical, the melancholic, the soulful, the sublime. Expect songs you may not know: haunting melodies of old Europe, joyful singalongs of the Southern US, and modern takes on the strange and ancient Christmas tale. Please join us for this special evening. Tickets are on-sale now at www.clubpassim.org.