Ripe at the Yarmouth Drive-In 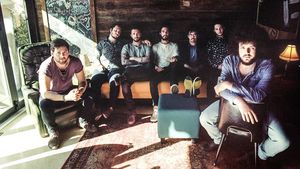 Live music is back! The Yarmouth Drive-in on Cape Cod will present rock band Ripe in concert Saturday, August 1st. This will be the first major live performance in the state since the lockdown went into effect in March. The Boston-based band will perform live to a crowd gathered in more than 450 cars, all safely able to socially distance from one another. Each ticket will cover one car with up to four people in it, with the option to add additional passengers. Tickets go on sale Tuesday, July 14th at 1:00 PM and will be available on yarmouthdrivein.com.

Blending rock, funk, R&B, jazz, and pop, Boston-based Ripe have won over legions of fans by compelling crowds night after night to get up on their feet and dance. Every performance fans get a unique show as the band improv off one another, creating a unique sound that feeds off the crowd's energy. Formed in 2011 while the band members were at the Berklee College of Music, Ripe has gone on to garner seven million listeners and more than 40 million streams, has performed at Bonnaroo and the Firefly Festival, and this drive in show will be the band's first performance since their two night sold out run at the Boston House of Blues in February.

Featuring three massive high definition LED screens and a stage, the Yarmouth Drive-in on Cape Cod has been designed to seamlessly present first-run and legacy family movies, alongside live comedy and music and the return of major league sports including the Boston's own Red Sox, Celtics and Bruins. The state-of-the-art screens are more than 40-feet wide and can be viewed even during daylight hours. Operating on the site of the Old Yarmouth Drive-In, the new site is one of the largest entertainment experiences operating in New England during the Covid-19 pandemic.

Tickets for Ripe at the Yarmouth Drive-in on Cape Cod are available online at yarmouthdrivein.com or at the gate, subject to availability. Each ticket will cover one car with up to four people in it. Up to three additional guests can be added to cars for $25 per person. Tickets range from $125 to $185 depending on which row guests want to park in. Gates open at 8PM; the show starts promptly at 9:00PM. Additional shows are expected to be announced soon. All guests are asked to join the Cape Club at yarmouthdrivein.com for the latest news about upcoming attractions, and first access to tickets. The Yarmouth Drive-In on Cape Cod is located at 669 Route 28, West Yarmouth, MA.