Ringo Starr & His All Starr Band / The Avett Brothers 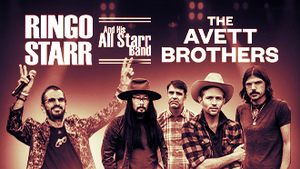 PLEASE NOTE: Ringo Starr & His All Starr Band / The Avett Brothers originally scheduled for the Wang Theatre on June 10th has been rescheduled to a new date on June 3, 2021. Your original tickets will be automatically transferred to the new date June 3, 2021. To contact Ticketmaster customer service, please call 800-982-2787.

This announcement comes on the heels of the release of Ringo’s 20th studio record, What’s My Name. The title track is a rousing anthem written by a returning All Starr Band member, Colin Hay, that turns a familiar chant from Ringo’s live shows into a rousing rocker sure to be a future crowd-pleaser.

The Avett Brothers made mainstream waves with their 2009 major label debut, I and Love and You, landing at No. 16 on the Billboard Top 200 and garnering critical acclaim. 2012 saw The Carpenter hit No. 4 on the Billboard Top 200 and was followed by Magpie and the Dandelion (2013) which debuted at No. 5 on Billboard’s Top 200 and saw the band appear twice on Jimmy Kimmel Live! True Sadness (2016) achieved The Avett Brothers’ highest career debut to date hitting No. 1 on Billboard’s Top Albums Chart, No. 1 Top Rock Albums Chart, No. 1 Digital Albums Chart, No. 3 on Billboard Top 200, and scoring two GRAMMY® nominations. This year the band released their tenth studio album Closer Than Together featuring new single “High Steppin” which reached #1 on the Americana Radio Chart. Coming soon: Swept Away - a new musical inspired by and featuring the music of The Avett Brothers - will have its world premiere at Berkeley Repertory Theatre in June 2020.