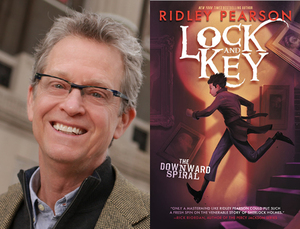 ABOUT THE BOOK
The bestselling author of the Kingdom Keepers series, Ridley Pearson, brings us the second book in the Lock and Key trilogy. The jacketed, hardcover middle grade series traces the origins of the animosity between Sherlock Holmes and James Moriarty, as told by James’s sister, Moria.

James Moriarty hasn’t been the same since he enrolled at Baskerville Academy. During his first year, he was forced to room with the insufferable Sherlock Holmes, he grew distant from his younger sister, Moria, and then, horribly, his father died under mysterious circumstances.

Now with school back in session, James has become more isolated than ever. And for the first time in her life, Moria isn’t sure if her brother is on her side. The only person she can trust is Sherlock. Sherlock listens to Moria’s problems and tries to break through James’s wall. He is obsessed, maybe to an extreme, with finding the truth about their father’s death. But at least Sherlock cares, and that’s why Moria joins him on a quest that leads to a secret sect, a rare jewel, and a murder that may change everything. The search for the truth is darker than even they could have anticipated. Rick Riordan, author of the Percy Jackson series, said, “Only a mastermind like Ridley Pearson could put such a fresh spin on Sherlock Holmes.” It’s another edge-of-your-seat mystery-adventure from New York Times bestselling author Ridley Pearson.

ABOUT THE AUTHOR
Ridley Pearson, the first American to be awarded the Raymond Chandler/Fulbright Fellowship in Detective Fiction at Wadham College, Oxford University, is the bestselling author of the Peter and the Starcatchers series, the Kingdom Keepers series, two dozen adult crime novels, and Lock and Key: The Initiation. Pearson combines rare abilities as the author of both successful crime novels and middle grade series. He can write action/adventure, bring a group of kids to life, and build an air of mystery. What’s more, his novel The Diary Of Ellen Rimbauer, a prequel to a Stephen King miniseries, was a New York Times #1 bestseller.