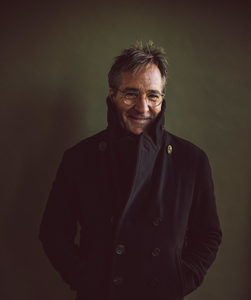 Originally from New York, now dividing his time between Buenos Aires, Argentina and New York’s Hudson Valley, Richard Shindell is a writer whose songs paint pictures, tell stories, juxtapose ideas and images, inhabit characters, vividly evoking entire worlds along the way and expanding our sense of just what it is a song may be. From his first record, Sparrow’s Point (1992) to his current release, Careless (September 2016), Shindell has explored the possibilities offered by this most elastic and variable of cultural confections: the song.

In 2015 he joined forces with Lucy Kaplansky to record another collection of covers, Tomorrow You’re Going (Signature Sounds), also produced by Larry Campbell. Consisting mostly of love songs, or love lost songs, it provided Shindell and Kaplansky an occasion to revel in their distinctive, two-part harmony with the backing of a top-notch band (Byron Isaacs, Dennis McDermott, Bill Payne, and Campbell) – all thanks to the participation of a committed community of fans who financed the project via the crowdfunding platform Kickstarter. The campaign more than doubled its funding goal in less than 48 hours.

Shindell continues to tour nationally in the United States, with the occasional forays into Canada, the UK, and Europe. Although known primarily as songwriter, Shindell takes a more holistic view of his career. Producer, writer, singer, guitarist, interpreter: it all adds up to a life in music.