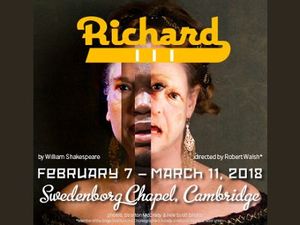 “I am thrilled to circle back to Richard III, ASP’s inaugural production in 2004,” says Walsh. “The timeliness of the play couldn’t be stronger–abuses of power today are as pronounced as Shakespeare imagined them in 15th century England. I look forward to telling a story with more than 65 characters–and just six actors–in the setting of an English Gothic style chapel, and how Shakespeare’s language will resonate in that space."