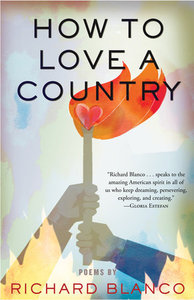 Inaugural poet Richard Blanco speaks with WGBH hosts Jim Braude and Margery Eagan about his most recent book of poetry, "How to Love a Country."

Selected by President Obama to be the fifth inaugural poet in history, Richard Blanco followed in the footsteps of Robert Frost and Maya Angelou. The youngest, first Latino, first immigrant, and first openly gay person to serve in the role, he read his inaugural poem, “One Today,” on January 21, 2013. Blanco and his family arrived in Miami as exiles from Cuba through Madrid, where he was born. The negotiation of cultural identity and universal themes of place and belonging characterize his three collections of poetry. His poems have also appeared in The Best American Poetry and Great American Prose Poems. Blanco is a fellow of the Bread Loaf Writers’ Conference, a recipient of two Florida Artist Fellowships, and a Woodrow Wilson Visiting Fellow. A builder of cities as well as poems, he is also a professional civil engineer and lives in Bethel, Maine, and Miami, Florida. He currently serves as the Education Ambassador for the American Academy of Poets.

Jim Braude is the host Greater Boston and co-host of Boston Public Radio. He has worked with co-host Margery Eagan for 18 years, first doing a TV show together at NECN then a radio show at WTKK. The duo came to WGBH in 2013. During law school, Jim ran a small retail business in Provincetown (HUBE – Help Us Break Even!). He started his professional career as a legal services lawyer in the South Bronx handling housing and prisoners’ rights cases. He was the founder and first president of the National Organization of Legal Services Workers, a union representing staff in civil legal offices for the poor in 35 states. NOLSW helped lead the fight to preserve the national program when President Reagan proposed its abolition. He then served as the executive director of TEAM, the Tax Equity Alliance for Massachusetts, a tax reform coalition, during which time he led many ballot campaigns, including the defeat of what would have been the largest budget cut on the ballot in U.S. history. He published Otherwise, a magazine on American politics, and then served as a Cambridge City Councilor. Jim graduated from the University of Pennsylvania and New York University’s Law School.

Margery Eagan is the co-host of 89.7 WGBH’s midday program Boston Public Radio. She has worked with co-host Jim Braude for 18 years, first doing a TV show together at NECN then a radio show at WTKK. The duo came to WGBH in 2013. She has written for her hometown paper, The Fall River Herald News, as well as the Standard Times of New Bedford, Boston Globe, Burlington Vermont Free Press, Boston Magazine, and the Boston Herald, where she wrote a column for 27 years. Eagan grew up in Fall River and attended Durfee High school. She attended Smith College and graduated from Stanford University. She has three kids and lives in Brookline.

25/04/2019 18:00:00 25/04/2019 07:30:00 15 Richard Blanco in conversation with WGBH’s Jim Braude and Margery Eagan at the BPL Inaugural poet Richard Blanco speaks with WGBH hosts Jim Braude and Margery Eagan about his most recent book of poetry, "How to Love a Country." Selected by President Obama to be the fifth inau... Boston Public Library, Boston, MA 02116 Organizer Organizer e-mail false DD/MM/YYYY Reddit