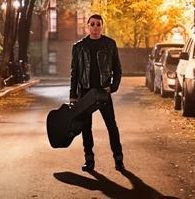 Richard Barone’s “Sorrows & Promises: Greenwich Village In The 1960s” casts new light on the songs that sprang from the singer-songwriters in and around Greenwich Village during that pivotal decade. While Top-40 hit songs were being churned out uptown in the Brill Building and at 1650 Broadway, the downtown writers were weaving folk, blues, R&B and rock into songs that five decades later still sound fresh and inventive. Richard’s choices cover a broad range of writers, from Buddy Holly, to up-and-comers like Paul Simon, John Sebastian (of the Lovin’ Spoonful) and James Taylor (of The Flying Machine), to the artists redefining folk music -- Bob Dylan, Phil Ochs, Tim Hardin, Fred Neil -- for a new generation. “Sorrows and Promises” revisits and re-imagines these songs that were a vital contribution to the American Songbook. Richard Barone is uniquely qualified to reinterpret these ‘60s classics; throughout his career, first with The Bongos and then as a solo artist, his work has shown the influence of the pop, rock and folk singer-songwriters who lived and worked in the Village neighborhood where Richard has lived since the mid-1980s.

beccs is a Brooklyn based musician from Boston. Hailed as The Deli Magazine's Artist Of the Month (NYC, December 2016) and NYLON Magazine’s new “favorite cool girl” with a “one-of-a-kind voice” who “screams originality” by the Huffington Post. With an evolving soul, alternative, woman-centric style, beccs lures listeners into a dynamic shared experience of self-exploration and celebration. Her debut release 'Unfound Beauty' was produced by Richard Barone and recorded by Steve Addabbo.