Revelry and Revolution: A Harbor Cruise 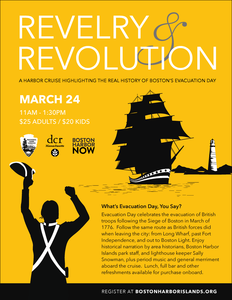 Evacuation Day celebrates the departure of British troops following the Siege of Boston in March of 1776. Follow the same route as British forces did when leaving the city: from Long Wharf, past Fort Independence, and out to Boston Light. Enjoy narration by area historians, Boston Harbor Islands park staff, and lighthouse keeper Sally Snowman, plus period music and general merriment aboard the cruise. Lunch, full bar and other refreshments available for purchase onboard.