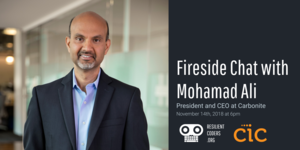 Join the Resilient Coders community for a fireside chat with Mohamad Ali, President and CEO at Carbonite. We will be taking over the stage at the CIC Lighthouse, overseeing the city of Boston. Mohamad will be speaking about his experience and lessons learned growing a company. He'll talk about building great teams, company values, and what leaders can do to share their vision with employees.

Driven by a passion for technology, Mohamad served as Chief Strategy Officer at Hewlett Packard where he played a pivotal role in the company's turnaround, and led the decision process to split HP into two companies. At IBM, Mohamad led the creation of the firm's eight billion dollar analytics software unit, and managed portions of the company’s supercomputing program. At Avaya, a former division of AT&T, he served as President of the telecommunications leader two billion dollar services group and led the company’s research labs.

Mohamad holds a bachelor’s degree in Computer Engineering and a master's degree in Electrical Engineering, both from Stanford University. He serves on the boards of Carbonite (NASDAQ: CARB) and iRobot (NASDAQ: IRBT), and previously on the board of City National Bank (NYSE: CYN).

He was named 2018 CEO of the Year by the Massachusetts Technology Leadership Council, member of 2018 Board of the Year by National Association of Corporate Directors New England, 2011 All-Star by Massachusetts High Tech magazine, 2008 40-Under-40 by Boston Business Journal, and was a finalist in America’s prestigious 1988 National Science Talent Search.

Karen Medina is a graduate from Resilient Coders, and Software Engineer at RStudio. She works on building sustainable open-source enterprise-ready tools, which offer software for data science and statistical computing.

Thanks to our space sponsor: CIC

CIC works with powerful, local partners to develop the critical networks that entrepreneurs need to grow effectively. For almost two decades, they have focused on strengthening vibrant communities, building collaborative work environments, and creating impactful programming to attract and support the very best entrepreneurs and their teams.

***This event is free and open to the public. Please note that registration is required, and space is limited.***

Reddit
14/11/2018 18:00:00 14/11/2018 20:00:00 America/New_York Resilient Coders Presents: A Fireside Chat with Mohamad Ali Join the Resilient Coders community for a fireside chat with Mohamad Ali, President and CEO at Carbonite. We will be taking over the stage at the CIC Lighthouse, overseeing the city of Boston. Moha... CIC Boston, Boston, MA 02109 false DD/MM/YYYY