Red Sox in 5s and 10s : Boston's agony and ecstasy 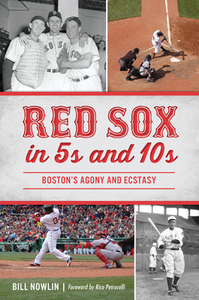 The Boston Red Sox have blown hot and cold over the decades. These lists of Top 5s and 10s cover both the highs and lows of a team that has endured a long history of both joy and sorrow. They won the first World Series ever played and then five more pennants in the next fifteen years. Famously, from 1918 until the magical year of 2004, the Sox endured eighty-six seasons without a championship, although they lost pennants and world championships on the last possible day more times than fans care to remember. Finally, in 2004, they won it all. Loyal fans will always remember the joy of Mo Vaughn’s grand slam on opening day in 1998 and will likely never forget the agony of Game 6 in 1986. Through it all, unforgettable names like Buckner, Yaz, Tony C. and Big Papi still resonate in the shadows of Fenway Park. From the greatest pitchers to the worst opening days, author Bill Nowlin recounts the highs and lows of Boston’s most celebrated sports franchise.


Born in Boston, Bill Nowlin has not gone far in life. He lives on the other side of the river now, in Cambridge. Less than five miles from Fenway Park, he has been going to games there since the latter days of Ted Williams and right up to the present. One of the founders of Rounder Records and a former college professor of political science, he has spent much of the past twenty years writing about baseball. Since 2004, he has been on the board of directors of the Society for American Baseball Research. He’s closing in on one hundred books at this point, mostly about baseball and many of them Red Sox–related.