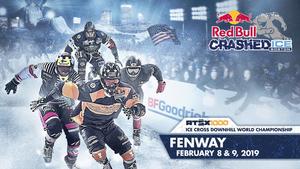 On February 8 and 9, Boston will experience an exhilarating sport unlike any other as Ice Cross Downhill makes its stadium debut at one of the most unique event locations in its history – Fenway. The event features some of the best and toughest skaters in the world, racing four at a time, shoulder-to-shoulder and reaching speeds of 50 mph, all while fighting it out for victory down a steep downhill ice track.
_________
SCHEDULE