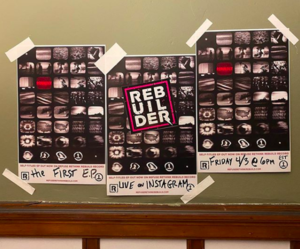 we haven’t played some of these songs since 2013. hope to see you xo

REFUSE. RETHINK. REBUILD.
Since their beginning in 2013, Rebuilder has refused to follow the rules. Their first show was at a bar playing to no one. Their second show was playing to a sold-out crowd with The Dropkick Murphys - That’s definitely against the rules.

So what has Rebuilder been up to since the release of their debut full length "Rock and Roll in America"? Well they've been doing just that. The self proclaimed gnarly-punk band from Boston has piled into their van, and brought their brand of never-say-die Rock & Roll to the people. Tireless travel up and down both coasts, throughout the Midwest, and even crossing the occasional boarder into Canada and Mexico, Rebuilder has put the pedal through the floor since their inception.

Their newest release on Panic State Records, an EP entitled "Sounds from the Massachusetts Turnpike" is a fervent and rambunctious follow up to ‘RNRIA’. With power and intensity, this record widens and solidifies Rebuilder’s sonic footprint in the landscape of rock and roll, re-thinking the traditional three chord punk song and developing their own unique style. ‘Sounds from the Massachusetts Turnpike’ comes out Sept 1st and was recorded, mixed and mastered by Jay Maas at Getaway Studios in Haverhill, MA.

Rebuilder will continue to pick up the pieces of a broken scene, and cast aside a broken system. They will soldier on, and rebuild the community of sounds that has given them so much to be thankful for.