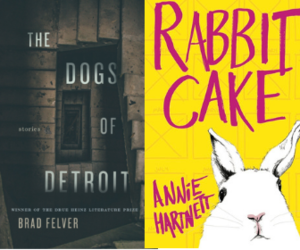 Hear Brad Felver (Dogs of Detroit), national short fiction award winner, and Annie Hartnett (Rabbit Cake), acclaimed novelist, read from their fascinating work. These young, up-and-coming authors will share insights about the creative writing process with the audience. There will be a Q&A and book signing.

Brad Felver is a fiction writer, essayist, and teacher of writing. His debut collection of stories, The Dogs of Detroit, (University of Pittsburgh Press) won the 2018 Drue Heinz Literature Prize and was named one of the Best Books of 2018 by Library Journal. His fiction and essays have appeared widely in magazines such as One Story, New England Review, Colorado Review, Hunger Mountain, and many others. His honors include the O. Henry Award, a Pushcart Prize Special Mention, and the Zone 3 Fiction Prize. He lives in northern Ohio with his wife and two sons.

Annie Hartnett's debut novel, Rabbit Cake, is out now with Tin House Books. Rabbit Cake was listed as one of Kirkus Reviews’ Best Books of 2017, was a finalist for the New England Book Award, an Indies Introduce and an Indie Next Pick, and was long-listed for the Center for Fiction's First Novel Prize. It received starred reviews from Publisher's Weekly, Kirkus, and Library Journal, and was People magazine's Book of the Week.

Hartnett has been awarded fellowships and residences from the MacDowell Colony, Sewanee Writers' Conference, and the Associates of the Boston Public Library. She holds degrees from the MFA program at the University of Alabama, Middlebury College's Bread Loaf School of English, and Hamilton College. She is currently at work on her second novel. Annie lives in Providence, Rhode Island, with her husband and their border collie, Willie.