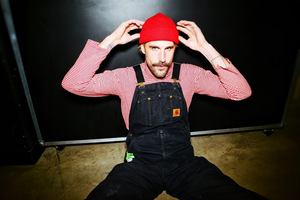 Thoreau had Walden Pond. Kerouac had Big Sur. Rayland Baxter? He had an old rubber band factory in Franklin, Kentucky, and it suited him just fine. As one of the hardest-touring artists on the road today, Baxter’s spent most of his professional life in transit, but ever since he was a kid, he dreamed of creative seclusion someplace lonely and isolated, somewhere he could sit still and devote his every waking hour to writing without interruption or distraction. When the opportunity finally presented itself in late 2016, the Nashville native pounced.

“I packed everything in my van and moved to Franklin for three months,” says Baxter. “It was the fist time I ever got to be alone and focus solely on songs like that. All I did was write, write, write all day every day. I was obsessed.”

By the time Baxter emerged, he’d penned more than 50 tunes and crafted a detailed blueprint for his spectacular new album, ‘Wide Awake.’ Deftly produced by Butch Walker, the record infuses Baxter’s easygoing, soulful sound with British Invasion melodies and rock and roll swagger, marrying lean, muscular songwriting with adventurous, inventive arrangements. It’s a cutting, insightful collection, one that takes a sardonic view the violence, greed, and division that seem to define the modern American landscape. Rather than point a finger, though, the music holds up a mirror, offering a sober reflection of the times thoughtfully bundled in bright, infectious hooks. There’s no judgment here, only keen observation, and Baxter implicates himself as much as his neighbor through it all.

“This is an album about decision making,” he explains. “It’s about being a human at the crossroads. Do I do good or do I do evil? Do I lie or do I tell the truth? Am I going to be happy or am I going to be sad? All of these questions and emotions are things I see in myself, and they’re the same things I see in everyone else no matter where I go.”

Baxter’s built a career on capturing those sorts of timeless, deeply human sentiments, bringing colorful characters to vivid life with equal parts humor and pathos. His debut album, ‘feathers & fishhooks,’ was a critical hit praised by Interview for its “well-worn maturity,” while NPR described “Yellow Eyes,” the lead single from his 2015 follow-up, ‘Imaginary Man,’ as “close-to-perfect.” Stereogum dubbed the record “an impeccable sophomore break-out,” and Rolling Stone hailed its pairing of “whimsical narrative with often deceptively complex arrangements.” The music earned Baxter festival appearances from Bonnaroo to Newport Folk in addition to tours with an astonishing array of artists, including Jason Isbell, The Lumineers, Kacey Musgraves, The Head and The Heart, Shakey Graves, Lauryn Hill, and Grace Potter.

“The six months leading up to the release of ‘Imaginary Man,’ that was the first time I really started playing electric guitar and performing with a band,” says Baxter. “We did my first headline run and toured that album for a year-and-a-half, and the experience really opened up this whole new sound for me. It helped me figure out more of who I was as an artist and a songwriter and a traveler and a human being.”

It was with that newfound sense of self that Baxter entered Thunder Sound, the abandoned rubber band factory-turned-studio in the cornfields of Kentucky that would become his home for three months of intensive soul searching and songwriting.

“I blanketed the windows so no one could see inside,” he explains. “I laid a mattress down next to an old Wurlitzer so I had somewhere to sleep. I had a guitar, a desk with a lamp and some paper and pencils, and that was it. For fifteen hours a day, I wrote.”

When it came time to record his mountain of new songs, Baxter relocated to Santa Monica, California, where he wrangled an all-star studio band that included Dr. Dog’s Erick Slick on drums, Butch Walker on bass, Cage The Elephant’s Nick Bockrath on guitar, and piano wizard Aaron Embry (Elliott Smith, Brian Eno) on keys. A producer and artist equally at home working with massive pop stars and indie stalwarts, Walker immediately embraced Baxter’s vision for the album, and the result is a sunny and altogether charming collection. Scratch beneath the surface, though, and you’ll find it’s populated by a cast of characters who project a vision of the good life as they struggle to keep it all together behind closed doors. On the punchy ‘Casanova,’ the singer reckons with debts he knows he’ll never be able to repay, while the volatile “Amelia Baker” charts the narrator’s descent into near-madness as he pines for a starlet perpetually out of reach.

“We have this society where we’re obsessed with celebrity and living on the top of the mountain,” says Baxter. “But what’s at the top? Maybe it’s a lonely place to wake up.”

Late 2016 was a particular tumultuous time in the country, and though Baxter did his best to isolate himself from the outside world while he wrote, it was inevitable that some of the chaos would seep in. On album opener “Strange American Dream,” a chiming piano and spare Motown groove give way to lush harmonies and unexpected melodic twists as Baxter sings, “I close my eyes and realize that I’m alive inside this strange American dream.” Meanwhile, the soaring “79 Shiny Revolvers” finds him reflecting, “you really wanna save the world, man / well, I wanna save it, too / we can blow ’em away / the American way.”

While ‘Wide Awake’ offers plenty of broad, wide-angle musings, some of its most arresting moments arrive bundled inside deeply personal memories and snapshots. The heartfelt “Everything To Me” is a tender tribute to family (Baxter’s father Bucky, who played pedal steel with Bob Dylan and Ryan Adams among others, contributes to the record), and the laidback “Let It All Go Man” is a reminder that there’s beauty in simply being alive.

“I actually started that song two years ago on a trip to South America,” says Baxter. “I was sitting on the porch of a house in this little town in Colombia, and I was all alone playing a gut string classical guitar, just staring out at the ocean and the beach in the middle of the night. It made me realize how much unnecessary stuff we hold on to, all the grinding away we do chasing success and money and missing the big picture. It made me realize what an incredibly beautiful gift it is to be human.”

That empty South American beach may have been a world away from the rubber band factory in Kentucky, but for Baxter, the effect was the same. The solitude offered a chance to observe, to reflect, to grow, to appreciate, and most importantly, to write.