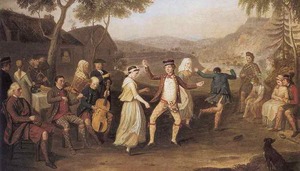 Our program explores the unique crossroads of 18th-century Scottish folk and classical traditions. In 1707, the nation’s Union with England sparked a patriotic surge of interest in Scotland’s own music tradition. As the Scottish Enlightenment swept the nation, Edinburgh became a hotbed of concerts, dances, and patronage of the arts. Professional musicians and country fiddlers crossed paths at the new coffeehouses and music salons that sprang up, while Scottish composers produced masterful settings of familiar folk tunes.

You’ll hear traditional tunes for fiddle and pipes; virtuosic variations by James Oswald, William McGibbon, and Robert Bremner; songs of love, mourning and patriotism by revered poet Robert Burns; and the choicest jigs, reels, and strathspeys to set your toes tapping. We include selections from early Scots sources including the Balcarres lute book, the Dixon bagpipe manuscript, and the Scots Musical Museum. We’ll pay homage to 18th-century Scottish drawing rooms and dance halls where the only difference between a fiddler and a violinist was the music in front of him!