Rally to Stand Up for Science 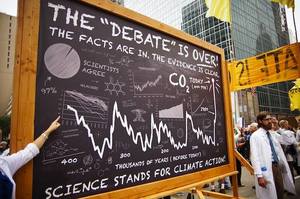 #StandUpForScience: Join scientists, allies and impacted communities at a rally in Boston, Massachusetts while thousands of scientists will be in town for the American Association for the Advancement of Science (AAAS) annual conference--the first one since anti-science forces and climate deniers have taken office.

Science serves the common good. It protects the health of our communities, the safety of our families, the education of our children, the foundation of our economy and jobs, and the future we all want to live in and preserve for coming generations.

But it’s under attack -- both science itself, and the unalienable rights that scientists help uphold and protect.

From the muzzling of scientists and government agencies, to the immigration ban, the deletion of scientific data, and the de-funding of public science, the erosion of our institutions of science is a dangerous direction for our country. Real people and communities bear the brunt of these actions.

The annual meeting of the American Association for the Advancement of Science (AAAS) brings thousands of scientists together and offers a global stage to send a message at this pivotal moment: we must Stand Up for Science.

- Science must serve the interests of all people, not just those in power.
- We must support publicly funded and publicly communicated science
- We must protect scientific integrity in policymaking.
- We must protect government scientists from censorship or suppression.
- We must keep scientific data that can benefit the health of our communities and environment open and accessible to the public
- A diverse group of scientists produces increasingly diverse research, which broadens, strengthens, and enriches scientific inquiry, and therefore, our understanding of the world
- Climate change is real, human caused, and an urgent threat. We must support climate science research and evidence-based policy aimed at mitigating climate change and addressing its impacts.

This is about freedom of inquiry and the future of evidence-based policy in the public interest. It's about the disproportionate impacts on communities of color and low-income communities. It’s about the impacts of the discriminatory travel ban. It’s about speaking truth to power.

This rally builds on the momentum of other scientist-led efforts since the election, including a rally outside the American Geophysical Union conference in December, and soon---the Science March taking place in DC and in cities around the world this April 22. https://www.marchforscience.com/

Reddit
19/02/2017 12:00:00 19/02/2017 13:30:00 America/New_York Rally to Stand Up for Science #StandUpForScience: Join scientists, allies and impacted communities at a rally in Boston, Massachusetts while thousands of scientists will be in town for the American Association for the Advanceme... Copley Square, Boston, MA 02116 false DD/MM/YYYY