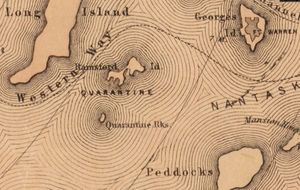 Author Bill McEvoy explores the history of Rainsford Island in Boston Harbor. Beginning with private ownership from 1636 to 1736, then the Province of the Massachusetts Bay, the Commonwealth of Massachusetts, and finally the City of Boston. The island’s complex history is best told by segmenting its various periods. Until 1854, it was occasionally a place of quarantine, as well as a summer resort for the wealthy. In 1854, while under the ownership of the Commonwealth, the island’s use took a turn beginning sixty-six years as an off-shore repository for Boston’s unwanted. Its inmates were victims of: poverty, lack of health care, mental illness, senility, addiction, lack of proper housing, poor sanitary conditions, inability to pay a small fine, men unable to find work, incarcerated as paupers, and unwed pregnant women.

We note 2 heroes: Alice Lincoln and Louis Brandeis. Their efforts resulted in the Cityending Rainsford Island as a warehouse for the poor, the unwanted, and the mentally ill. Rainsford entered its final 26 years as the Boys’ House of Reformation. Further examples of inept management, cruelty, neglect, and death, of “Unfortunate” boys ages eight to eighteen are documented. Sentences ranged from playing ball on Sundays to murder. Those boys were commingled on the 11 acre island.

His book is dedicated to the memory of all who were sent to Rainsford Island, especially those who remain buried there, still neglected but now not forgotten. This book dedicates a chapter to those that never left the island in unmarked graves, including a War of 1812 Sailor; 9 Civil War soldiers who died on active duty; and 108 Veterans of the Civil War who died between 1873 and 1893. 14 of those Veterans were African American, one was a member of the 54th Mass Regt.

Bill McEvoy is a US Army Veteran (1968-1971). He earned a BA from Bentley University, MBA from Suffolk University, and MA in Political Science from Boston College. While at BC he had the privilege of participating in a semester long colloquium with Dr. Thomas H. O’Connor, the Dean of the History Department.

He retired as a Massachusetts District Court Magistrate in 2009. He has volunteered for eight years with the No Veteran Dies Alone program at the Bedford Veterans Hospital where he is still glad to be actively working, as well as performing pro bono work as a Magistrate, one day per week, for ten years until this past fall.

Since his first month of retirement, he has performed many large-scale cemetery research projects, several as a volunteer at Mount Auburn Cemetery (MAC). In addition to Rainsford Island he performed a four year study of the 23,000+ people (primarily Irish immigrants or their first generation descendants) buried from 1854 to 1920 at the Catholic Mount Auburn Cemetery (CMAC), Watertown, MA. He is presently writing book about the cemetery, as well as the people buried there.