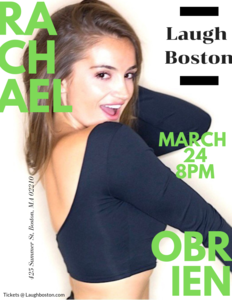 You've seen her on Vanderpump Rules, now see her live in Boston! Rachael is a stand-up comedian and actress who has performed stand-up in nine countries in the most prominent comedy clubs and has done two USO military tours for our troops overseas. She has shared the stage with household names like Bill Burr, Judd Apatow, Whitney Cummings, David Spade, Ali Wong, and many more. She is a Second City Hollywood conservatory grad and also performs on the main stage. Currently, Rachael can be seen on Bravo’s hit TV show Vanderpump Rules, which is currently airing it’s 7th season. Her popular podcast, Be Here For Awhile, has topped the comedy charts on Apple Podcasts and has received over 5 million downloads!