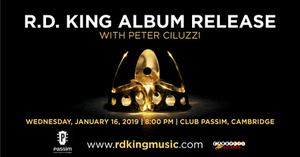 Performing with King is Peter Ciluzzi, a fellow acoustic guitarist and Candyrat Records artist from Massachusetts. Recently described as "transcendent" by Acoustic Guitar Magazine, Ciluzzi's music transports listeners through virtuosic, evocative compositions that tell as story without words. He has toured and performed throughout the US, and his acclaimed solo work has accumulated millions of views on YouTube and more than 10 million plays on Spotify.