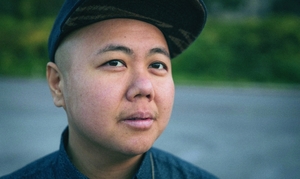 "An intimate and fiery hour of slam poetry. Delightfully explicit. Yan’s solo performance rose to the top of a crowded field.”
New City Stage
Created and performed by Kit Yan
Directed by Jessi Hill
Kit Yan is an award-winning, queer, trans, Asian-American poet from Hawaii. Queer Heartache is his solo slam poetry show that explores his identities, asks what queer hearts and families are made of, and interrogates the forces that constantly work to break them apart. Queer Heartache is a testament to the resilience of queer love in all its forms—between cis and trans siblings, lovers, pride parade attendees, and many more—in the face of heartbreaking barriers everywhere from the dating pool to the medical establishment. If you’ve ever had your heart broken, wondered how your pets self-identify, or wanted to tell someone your gender is none of their business, this show is for you.

Queer Heartache was part of the 2016/17 OBERON I.D. Festival. The show has also been featured in the 2015 Chicago Fringe Festival, where it won the Artist's Choice, Audience Choice, and Spirit of Fringe awards, and 2016 San Francisco Fringe Festival, where it won Volunteer's Choice and Best of Fringe, and had its New York premier at the first annual 2016 Transgender Theater Festival. A print adaptation is out now through TransGenre Press (2016).