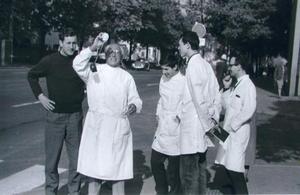 UPDATE: Due to Harvard University’s recent on-campus meeting and event guidance around Coronavirus (COVID-19), this event has been canceled. Thank you for your patience and understanding.

Allied government intelligence agencies working in Germany during the closing chapters of World War II and immediately after invited various official bodies and businesses to join them in collecting commercial information from the defeated nation. Among many industries, artists’ colormen eagerly participated in the state-sponsored sequestration of German intellectual property by seeking out information related to the processes and conservation of pigments, binders, canvas, inks, and other materials, products, and practices.

In this lecture, Morwenna Blewett, the Sackler Fellow in the History of Conservation, of Worcester College and Ashmolean Museum at the University of Oxford, will explore the role of representatives of British color manufacturers Winsor & Newton, Ltd., and George Rowney & Company, who spent nearly a month in Germany attempting to gain knowledge of German art materials in order to improve their own.

Blewett will also discuss how new research reveals that some of the most august art institutions in London, the National Gallery and the Courtauld Institute of Art among them, made every effort to profit from expertise gathered from a professor named Kurt Wehlte. They sought his knowledge about art materials, conservation, and teaching—despite the significant roles he played in the National Socialist genocidal and totalitarian regime.

The lecture will take place in Menschel Hall, Lower Level. Please enter the museums via the entrance on Broadway. Doors will open at 5:30pm.

Free admission, but seating is limited. Tickets will be distributed beginning at 5:30pm at the Broadway entrance. One ticket per person.

Support for the lecture is provided by the M. Victor Leventritt Fund, which was established through the generosity of the wife, children, and friends of the late M. Victor Leventritt, Harvard Class of 1935. The purpose of the fund is to present outstanding scholars of the history and theory of art to the Harvard and Greater Boston communities.