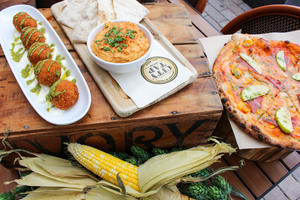 If you can’t beat ‘em, join ‘em. The season of “pumpkin everything” is upon us so City Tap House is doing what they do best: welcoming it with open arms (and with hungry stomachs).

Since some have a tendency to go a bit overboard with the pumpkin craze, City Tap House has decided to raise the stakes even further because more is more. On October 8, the Forth Point beer paradise will host their Pumpkin Smash event featuring a 200-pound pumpkin filled with Dogfish Head’s seasonal brew, “Punkin Ale.” And if this photo op isn’t Instagram-worthy enough, try adding a “Pumpkin Smash” keepsake glass to the mix brimming with suds from the gourd-licious keg.