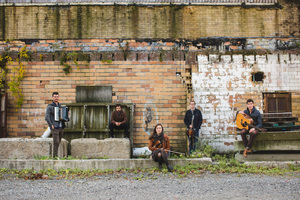 ​In September of 2016, five longtime friends, drawn to one another by their musicality and distinguishable voices on their instruments, performed as “Pumpkin Bread” for the first time. Since then, the five-piece folk ensemble based in Boston, MA has been dazzling audiences with its original acoustic music that blends influences from traditional folk songs and fiddle tunes with modern sensibilities and intricate arrangements. Pumpkin Bread developed its uncommon sound in kitchen jams, traditional music sessions, and soup nights in the Boston area folk music scene. The band released its self-titled debut album in May 2017 in collaboration with Nine Athens Music.

Pumpkin Bread, known for dynamic and captivating performances that draw on the energy in the room, has performed as part of Brian O’Donovan’s Burren Backroom Series with Keith Murphy and Maeve Gilchrist, and was a headlining act at the 2018 Boston Celtic Music Festival. Sought after for their arranging expertise and chamber-like ensemble playing, the members of Pumpkin Bread teach individually and as a group at fiddle camps and workshops throughout the country, including the ensemble workshop at Hanneke Cassel’s Pure Dead Brilliant Fiddle Weekend. In the spring of 2018, the ensemble toured in Boston, New York, Baltimore, Washington D.C., Charlottesville, Middlebury, and Portland, performing at decorated folk venues like Club Passim in Cambridge, MA, The Front Porch in Charlottesville, VA, and One Longfellow Square in Portland, ME.