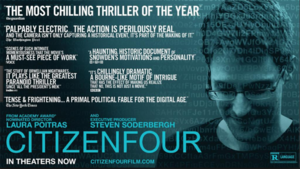 Laura Poitras’s 2014 documentary takes its point of departure in the filmmaker receiving encrypted emails from someone with information on the government’s massive covert-surveillance programs. Poitras and reporter Glenn Greenwald meet the informant in Hong Kong to learn the alias “CITIZENFOUR” belongs to Edward Snowden, a high-level former CIA analyst. What unfolds is the handing over of classified documents providing evidence of mass indiscriminate and illegal invasions of privacy by the National Security Agency (NSA) and eventually, Snowden’s current asylum in Russia.

All programs are free and open to the general public. RSVPs are required. RSVP here.