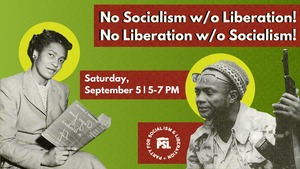 Rebellion is in the air and many people are gravitating towards ideas like “abolishing the police” and reparations for Black America. These are ideas that we were told time and time again by capitalist politicians and apologists are “utopian.” But, things are changing. the masses of people's consciousness is growing and radical and revolutionary politics, socialist politics are becoming more common sense. The Black working class is leading this current rebellion against the racist police state from Kenosha to Minneapolis. It is the Black working class, whether they be "essential workers" on the front line against COVID19 or living in communities marked as "prime real estate" by racist development companies, that is leading a class-wide rebellion against capitalism and the state.
So what will it take to end this racist imperialist system and achieve Black liberation and the ending capitalist oppression & exploitation? What is the historical connection between the struggle for Black Liberation, and that of other oppressed and colonized people with the struggle for socialism? Is socialism a "white ideology" or is it what Bernie Sanders says it is?
Karl Marx theorized that socialism would grow out of the highly developed industrial capitalist economies of the West, where the surplus needed to provide people’s needs was present and the industrial working class was growing. Outside of Russia, which was already marginalized within the European racial hierarchy as an "other” in Europe, socialism took root and grew in the Global South - Africa, Asia, Central and South Americas. Why did this happen? Why did groups like the Black Panthers declare solidarity with Cuba, China, Vietnam, DPRK ("North Korea") and other revolutionary movements?
This public political education session will focus on the history and struggle of people of the color struggling for socialism and national liberation.
We in the PSL believe firmly that "there can be no socialism without liberation and no liberation without socialism!"
Join us and learn about these two deeply intertwined struggles.

Reddit
05/09/2020 17:00:00 05/09/2020 19:00:00 America/New_York Public Political Education: No Socialism w/o Liberation! No Liberation w/o Socialism! Rebellion is in the air and many people are gravitating towards ideas like “abolishing the police” and reparations for Black America. These are ideas that we were told time and time again by capita... Online, Boston, MA 02110 false DD/MM/YYYY