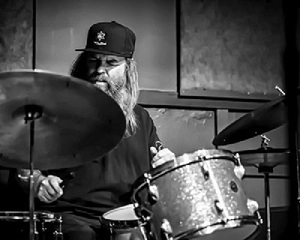 In an evening
Of provocative, adventurous, aggressive, dynamic, experimental, creative free form and unrestricted Jazz and improvisational music that can only mean a (re-)energy and enthusiasm for the human spirit that has been locked up for months now.
Musicians are open to new and innovative ideas – the music is always filled with joy and passion - to improvise and drive the will to research, extract and explore as well as to demonstrate their own and modern conception of avant-garde jazz.
Virtuosity, extended playing techniques, sonoristic experiments and extraction of peculiar timbres form an independent and exclusive combination
Musicians are exploring new technical abilities, extracting strange and original timbres and creating their own, modern, radical, provocative or simply impressive ways of playing. A wide stylistic variety is created – innovative ideas and traditions go along together
Led by Matt Crane, drums,
https://mattcrane.bandcamp.com/album/theory-of-colors
https://www.youtube.com/watch?v=k6uoLY3TJZA
https://mattcrane.bandcamp.com/

Damon Smith, bass, already a Boston Improv/Avant Jazz/New Music hero for the years he energized the scene, he returns to perform in an ad hoc trio to continue to display…
“Damon Smith is a master of bowed bass and sounds inspired throughout—and well versed in the various incarnations of Jazz and free improvisation getting around playing with a wealth of international musicians—weaving a web with Mr. Fielder’s equally creative drumming. Best rhythm team only record I’ve heard since those two by William Parker and Hamid Drake, and that is really something special! - Bruce Lee Gallanter, Downtown Music Gallery.
“…but it is the broad-mindedness of both players and the tension between divergent approaches that creates a pulsing sense of swing underneath (the music)”. Balance Point
“he’s an active and even aggressive instigator and that willingness to test the mettle of those he respects informs each of six duets that comprise the disc”. Derek Taylor, Dusted
Since arriving in Boston, now in St. Louis, Damon has been very importantly active in the creative Jazz scene, joining the musical forces here already and part of visiting artist’s arrangements to contribute to a revitalized environment that Boston was known for decades ago!

"Whether in the hands of Charlie Parker, Ornette Coleman or John Zorn, the alto saxophone has long been an instrument of radical change in jazz. The influence of all three giants is audible in the work of young NYC altoist Chris Pitsiokos, but on this harsh yet revelatory quartet album [...] he puts forth his own startlingly original vision. [...] move from hyperactive freeform scramble to viselike compositional precision [...] herky-jerky punk-funk outfit's bent take on prog. Throughout the record, the leader's astonishingly fleet sax work – sometimes darting and soulful, sometimes squalling and unhinged – explodes with urgency and feverish invention”.
--Rolling Stone

"A persuasive combination of harmolodic jazz and contemporary noise rock."--Downbeat

"Pinpoint precision and unhinged fury...go-for-broke intensity...dazzling array of tactics...From piece to piece he shows an expanding range that accommodates both tender phrasing and a lacerating tone."
-Chicago Reader

"It’s very difficult to do justice, using words, to how enervating and annihilating this set was" and "pure face-ripping of the highest order"
-the Village Voice
Bio:
Matt Crane:
Born and raised in Los Angeles, Crane has been playing percussions since before he was in school. From playing in a fourth grade band on a drum set fabricated out of ice cream bins, to playing punk rock in the early eighties, to discovering jazz and playing with Ornette Coleman, to performing and attending a voodoo ceremony in Haiti, his musical development has been continual and exponential. Focusing on pure improvisation since the early nineties, he currently lives and works in Rhode Island and continues to collaborate, perform, and record widely. www.matthewallencrane.com

Chris Pitsiokos (b. 1990) is a Brooklyn-based saxophonist, composer and improviser. His compositions often provide a framework for performers to express a singular aesthetic vision without subjugating their voices as creative elements in their own right. In this way his work contrasts with traditional modes of composition in which the composer or band leader is the sole, or primary arbiter of a unified, preconceived vision.

Chris has been praised by Rolling Stone for his "startlingly original vision" and "astonishingly fleet sax work." Downbeat has identified his band CP Unit as "a persuasive combination of harmolodic jazz and contemporary noise rock." As a soloist he has developed a unique voice on the alto saxophone: his expansion of the instrument's vocabulary has served to multiply its emotive and formal capabilities.

As a bandleader and soloist he has toured throughout the US, Japan and Europe. In 2016 he was a resident at John Zorn's club the Stone and contributed to Arcana, a series of books edited by Zorn. In 2017 he had a solo concert at ISSUE Project Room in New York, toured Europe with CP Unit for the first time, and toured Japan as a soloist and performed with luminaries Otomo Yoshihide, Sachiko M, Tatsuya Yoshida, Makigami Koichi, and Jojo Hiroshige (Hijokaidan). 2018 was marked by a busy festival touring schedule, including (but not limited to) two European tours with CP Unit and a duo tour with Otomo Yoshihide. He has also worked with Nate Wooley, Paul Lytton, Peter Evans, Weasel Walter, Jaimie Branch, and Tyshawn Sorey. In Spring 2019 he will tour South America for the first time.

Pitsiokos serves on the editorial board of, and writes for, Sound American.

DAMON SMITH was born on Oct. 17th, 1972 in Spokane, WA.www.balancepointacoustics.com. After many years in the San Francisco Bay Area, and six great years in Houston, Texas Damon moved to the Boston area in the fall of 2016. Damon studied double bass with Lisle Ellis and has had lessons with greats Bertram Turezky, Joëlle Leandré, John Lindberg, Mark Dresser and others. Damon’s explorations into the sonic palette of the double bass have resulted in a personal, flexible improvisational language based in the American jazz avant-garde movement and European non-idiomatic free improvisation. Visual art, film and dance heavily influence his music, as evidenced by his CAMH performance of Ben Patterson’s Variations for Double Bass, collaborations with director Werner Herzog on soundtracks for Grizzly Man and Encounters at the End of the World, and an early performance with the Merce Cunningham Dance Company
Damon has collaborated with a wide range of musicians, including: Cecil Taylor, Marshall Allen (of Sun Ra’s Arkestra), Henry Kaiser, Roscoe Mitchell, Michael Pisaro, Wadada Leo Smith, Marco Eneidi, Wolfgang Fuchs, Peter Brötzmann and Peter Kowald. Damon has run Balance Point Acoustics record label since 2001, releasing music focusing on transatlantic collaborations between US and Europeans.
Smith is a staunch believer in deference towards one’s elders, a stance that comes through in everything from his rigorous efforts at advocacy to regular acknowledgments of the debts he owes musically to those who have come before. Fortunately, Smith’s unerring admiration doesn’t extend to a passivity or acquiescence when it comes to the actual making of music with his heroes. Rather, he’s an active and even aggressive instigator and that willingness to test the mettle of those he respects informs each of six duets that comprise the disc. Derek Taylor, Dusted