Protecting Stellwagen Bank: A History of the Sanctuary – 25 Years and Moving Forward 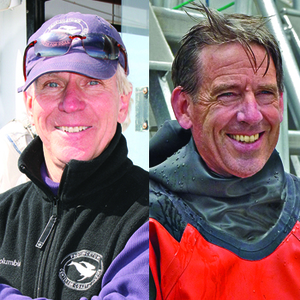 More than 25 years ago, threats to an underwater bank at the mouth of Massachusetts Bay abounded. Construction teams considered the sand and gravel fair game for the Big Dig, and a developer posited a plan for a casino complex on an oil-rig-like platform. Luckily, whales, fish, and the backing of thousands of whale watchers, students, fishermen, and environmentalists sank those ideas. The productive region around Stellwagen Bank was designated a national marine sanctuary in 1992. Rich Delaney, President and CEO of the Center for Coastal Studies (which nominated Stellwagen Bank for sanctuary status), had served as director of the Mass. Coastal Zone Management Office during the process to create a sanctuary. Ben Haskell, the sanctuary’s acting superintendent, leads a team of researchers and educators who work to understand and protect this special place. They will provide a retrospective of the first 25 years of New England’s only national marine sanctuary and a vision for the next 25 years.