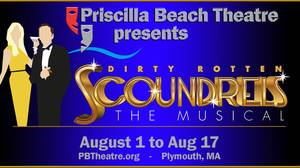 Ron Fassler returns to direct Dirty Rotten Scoundrels. This production marks Ron’s return to Priscilla Beach Theatre for a fifth summer in a row.
In 2015, Ron directed Fiddler on the Roof which officially re-opened our historic barn theatre. Subsequently, Ron staged A Funny Thing Happened on the Way to the Forum (2016), The Producers (2017) and Guys and Dolls (2018).
The con is on! Based on the 1998 film comedy, starring Steve Martin and Michael Caine, this musical adaption is the recipient of 11 Tony nominations during its Broadway run. A couple of con men think they have the upper hand when swindling rich women. Come find out how wrong they are!
Performances August 1 – August 17 at Priscilla Beach Theatre, 800 Rocky Hill Road, Plymouth MA. Tickets available at www.PBTheatre.org or by calling the box office 508-224-4888.
Presented by special arrangement with MTISHOWS.com