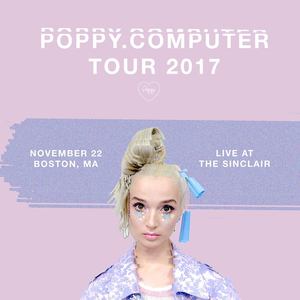 In the year 2014 a small doll like creature emerged from Youtube.com.

Is she a human? Android? Cross breed?

Will we ever know?

Thanks to her video titled "I'M POPPY” (that has now been viewed over 10 million times) we know one thing is for sure, She’s Poppy!

With several hundred videos under her belt (this year) and hundreds of millions of views on YouTube, Poppy prepares to release her debut album on October 6, 2017.

If the internet Gods have blessed you with Poppy’s presence, you have probably felt like you were transported into another dimension or perhaps another state of mind? Directed by Titanic Sinclair, Poppy’s videos are a daily morphine drip for a social media addicted generation.

Who knew watching a small blonde girl recite the obvious, question existence, or just eat something could make you feel so perplexed. Wired Magazine says “The magic of Poppy is that, to understand Poppy, you have to keep watching Poppy. And soon you find yourself watching her everywhere: YouTube, Twitter, Instagram, Snapchat. Before long, you’re swimming in a sea of Poppy. The water is cool and pink but eventually you wonder if Titanic will start turning up the heat and that, before you know it, you’ll be boiled alive or choke on the Pepto-Bismol taste and drown. You dive deeper anyway."