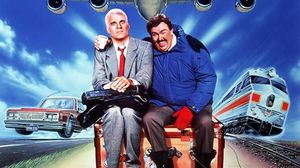 A little background on tonight's film from the critics, Devon and George:

Steve Martin and John Candy star in this holiday classic. From the director of "The Breakfast Club" and "Ferris Bueller's Day Off," this road trip comedy follows Neal Page (Martin) as he tries to get from New York to Chicago in time for his Thanksgiving family dinner. When a snow storms stops his flight short in Kansas, Neal finds himself traveling alongside the good-hearted but overbearing Del Griffith (Candy). With the holiday right around the corner, this newly formed “odd couple” must work together to get home, if they can manage to get along that is.

While writer/director John Hughes is most known for his films about youth and the teenage experience, "Planes, Trains and Automobiles" shows his talent for bringing humor and warmth to a story geared more towards an adult audience. The film is also notable for the standout performance by John Candy, who felt his work on this picture was the best of his short-lived career. Candy brings a quiet sadness to a character who may have easily been the film’s punching bag in the hands of a different actor and director. Such elements elevate this film from more than just another rendition of "The Odd Couple" or "The Out-of-Towners." It reveals itself to be not only one of the best comedies of the 1980s, but perhaps John Hughes’ strongest film.