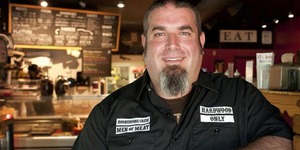 On Tuesday, November 13, Boston’s Award-Winning Chef and Pitmaster, Andy Husbands of The Smoke Shop will host the next installment of his inaugural Pitmaster Dinner Series, featuring Owner and Pitmaster, Brian Treitman of B.T.’s Smokehouse, winner of Food & Wine’s 2018 Best BBQ in Massachusetts, presented by Bulleit Whiskey. The Smoke Shop’s new Pitmaster Dinner Series is the first of its kind to debut in New England, bringing World BBQ Champions from across the country to the restaurant’s newest location at Assembly Row in Somerville, MA.

Starting at 6:00PM, join Husbands and Treitman as they team up to cook, smoke and prepare competition-style ‘cue, followed by an exclusive Q&A with the award-winning Pitmasters. Guests will kick off the evening with passed appetizers including Pig Newton, Pickled Shrimp, and Fall Squash Succotash Shooters, before taking their seats for a plated course of Tomato Pie with pickled collard chimichurri and family-style feast featuring B.T.’s Famous Smoked Brisket and Smoked Pickled Brined Chicken as well as Bourbon Maple Banana Pudding with buttered graham biscuit bottom and house candied bacon brittle for dessert. The bar will be serving up signature Bulleit cocktails to pair with the duo’s award-winning BBQ.

About the Pitmaster: Owner and Pitmaster of Massachusetts famous B.T.’s Smokehouse, Brian Treitman, has been preparing his award-winning ‘cue since 2007. B.T.’s Smokehouse started out as a small roadside trailer next to the Brimfield Antiques Fair, the largest antique fair in the world. The BBQ trailer that started as a side gig for Treitman quickly turned into his passion. He worked out of the trailer for two and a half years until he purchased the brick and mortar space that is the permanent home of B.T.’s Smokehouse since 2009. Since opening the space, it quickly expanded from its originally 3 booth and 4 counter seats to just over 40 seats. B.T.’s Smokehouse has also upgraded the kitchen to add two 1800-pound capacity smokers. Treitman specializes in southern style barbecue and is best known for his Brisket Reuben Sandwich.

Tickets are $49 per person, which includes passed appetizers, (1) featured cocktail, followed by a family-style seated dinner and exclusive Q&A with featured Pitmaster, Brian Treitman. Space is limited; tickets are required and can be purchased here.