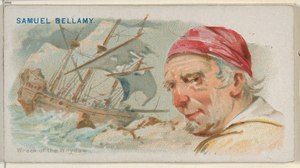 Did you know that colonial Boston was a hub of activity for the 18th Century’s most notorious pirates? During this “Golden Age of Piracy” pirates not only robbed ships bound to and from Boston, but they also sold their illicit good here, married here, were imprisoned here, and sometimes were executed here.

This virtual program presented in partnership with The National Park Service not only examines what led to the era’s explosion of piracy along the eastern seaboard (as well as the reasons for its decline), but also what motivated the values of pirate crews. Were these swashbucklers simply colorful sea-going criminals, or did their belief in economic, social, and racial equality not only predate, but influence the later American Revolution?

As examples, this lecture examines the lives of four of the most edifying pirates who walked streets of Boston, including Captain William Kidd, “Black” Sam Bellamy. Ned Lowe, and William Fly.

To attend, please register at the following link: https://boston-public-library.zoom.us/webinar/register/WN_vXpp0xSnTXG4Q0GPFEwyuQ.